Retired. I used to work for a charity in Croydon.

I went to a couple of adult training sessions then started going out on Sunday afternoons on basic beginner rides – round South Norwood Country Park, Crystal Palace Park, and to Ladywell and back. I had a very heavy mountain bike at the time and found it really hard going so gave up.

The following summer I tried again on a hybrid and found it much easier so started going on Breeze rides. The year after that I started joining the Steady ride on Sunday mornings.

In 2015 I trained as a Breeze Champion and started leading regular women’s rides, and also leading the Steady ride on a regular basis.

Currently the Steady group. I was going further and faster but in 2020 had a hip replacement and haven’t yet got up to speed.

It is inclusive, friendly and sociable.

Women are treated on an equal footing as men. Quite a few have come through from Breeze and I certainly recommend it as one of the most welcoming to women.

It should really be the Prudential RideLondon-Surrey 100, but it is probably the first time I rode to Brighton in 2015.

I rode the Coast to Coast with my my Daughter, Rachel. I also really enjoyed the Flat Fairies Audax.

Don’t try and be too ambitious too quickly. You don’t have to go faster and further just because everyone else seems to be. Stick to the level you’re happy with.

I’ve always had a soft spot for Kelly Holmes. I was lucky enough to go on a ride with her a few years ago. She is a keen cyclist and getting up Yorks Hill seemed to give her as much of a sense of achievement as her Olympic gold medals.

I rode into a post on the Waterlink Way and went flying. No serious injuries, fortunately. In fact I’ve fallen off a few times when stationary! 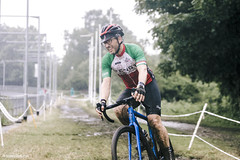